Going off the pisted map in Klosters with Pure Powder

It’s an exciting prospect for someone obsessed with the fluffy white stuff to head to Klosters for a few days. Known for its expansive range of off piste skiing I had a lot to look forward to on my first ‘official’ role since I’ve joined the heli skiing and off piste skiing experts at Pure Powder! We were taking Gabriella le Breton to show what we were all about…

My journey there relied on the Swiss train system which was a breeze – every train is bang on time (the carriages seemed slightly ‘old school’ but that made it even more charming). And on my arrival, I was taken to my hotel, the Silvretta. The next morning I met our Mountain Guide, Johnny Muller, at the Gotschna Sports shop. The family-run ski rental shop is fantastic and has the most amazing selection of the latest skis, boots and other equipment. I was kitted out in no time as well as with a shovel, probe and touring skins and an avalanche transceiver firmly nestled under my fleece.

I was happy to let the trusty Johnny take the lead – which he does with impeccable manners and a relaxed attitude. With my very snazzy Movement Tattoo skis on my shoulder (surprisingly light), we marched to the Gotschna telecabine and went up into the clouds. There was hardly anyone around so we pretty much had the whole mountain to ourselves. After a couple of t-bars and short schusses, we were in the Parsennhutte area. It was snowing, but before this mini dump there had been very little snow in the area for a couple of weeks. Johnny did have to scratch his head a few times, so considering the conditions were not favourable I was impressed that he managed to find us any fresh lines at all – but he did. We even caught a glimpse of some Steinbock mountain goats. We did a maximum of about 30 minutes skinning that day, which is not bad and the rest was just short hikes or going off the side of the piste. 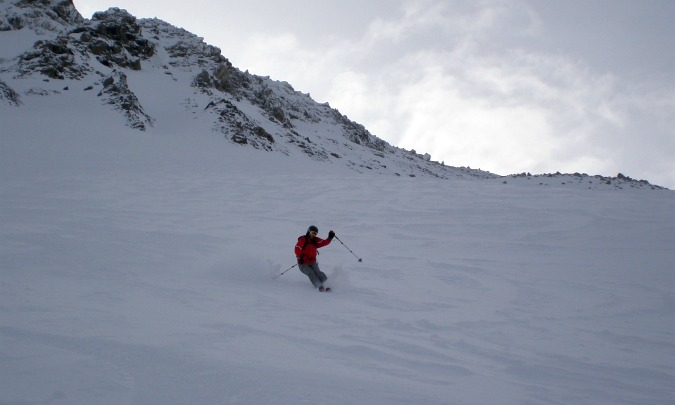 We stopped for lunch at Die Alte Schwendi restaurant, lapping up a hearty rosti, a massive ‘side’ salad and hot chocolate (staple mountain diet!) to then have a great afternoon of challenging and good powder runs (the après ski beer at Gaudy’s Graströchni tent was much deserved).

The next day, I was itching to get out and find more powder. So I felt very lucky when I opened my curtains to see blue skies and a nice sprinkling of snow. We headed to Davos, which is a large town along the valley. It’s not the prettiest of places but you only have to look up the hill to know why you’re there. Again, with no queues and only a few skiers to be seen, we headed up the Jakobshorn side and traversed across some incredibly beautiful terrain. It was then ‘whoopee’ time for us and we bounced down the mountain all day, dropping into some beautifully quaint valleys with farms and even a rugged ‘mountain man’ strapping up his leather boots – how picturesque! It was a truly idyllic day, again with only a 30 minute skin up for some epic lines and stopping for a lovely lunch in a converted water mill by the river.

The trip was highly enjoyable and I was blown away by the off piste skiing in the Klosters and Davos area. Although the guides would prefer us not to shout about this unknown hidden gem, I think people should experience its charm, fantastic scenery and amazing skiing.

To book an off piste trip with Pure Powder to Klosters or any of our other European off piste destinations; click here for more information.