When is the best time to travel to Alaska?

Ah…the BIG question, and one that we are asked frequently.  When is the best time to go heli skiing in Alaska?  As the heli ski season in Alaska is upon us we thought now was a good time to give you some handy pointers. 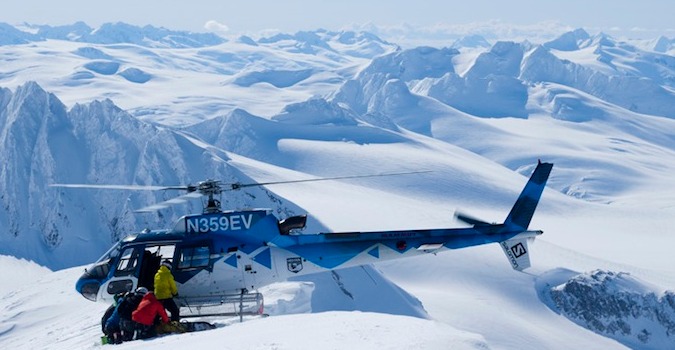 Alaska – Heli Skiing; when is best to travel?

Firstly, the best time to travel to Alaska is actually down to finding out when your diary is free to allow you to go heli skiing!  It sounds obvious but the first place to start is your availability in order to make plans.  It’s also not just a glib response as the other reason for saying that is ultimately we’re dealing with the weather which is of course inherently unpredictable in Alaska.  Therefore, you can’t go far wrong with choosing when it is the best time for you to travel to Alaska, and leaving the rest to mother nature…

However if (like me) you are a planner at heart and have the benefit of a clear diary then there are obviously some ‘norms’ of what to expect during different parts of the heli skiing season in Alaska.  At different times of year the actual heli skiing experience will change slightly depending on when you go to Alaska, so it gives you an opportunity to heli ski at a time in the season that best suits what heli ski trip you are after.

What heli skiing you can expect

The heli ski season in Alaska runs from the start of February to the end of April – it’s a pretty short season, mainly due to the lack of daylight hours early in the year.  But, when is the best time to travel to Alaska?

Early season heli skiing (February):  This is usually the best time to heli ski in terms of pure snow quality as the temperatures are cold, there are few layers in the snow-pack and the big snow storms are rolling through with regularity.  On the flip side, the days are pretty short and you could be unlucky with bad weather reducing the amount of heli ski flying time (going for the cat skiing back-up option is always a good plan which is available at our Girdwood base)

Mid-season heli skiing (March/April):   Mid-March to mid-April is the most popular time to heli ski in Alaska as the days are longer, giving you more opportunities to heli ski, and the temperatures are still relatively cold with some regular snowfalls expected.  So essentially you can strike a balance between daylight, conditions and also stability.

End season heli skiing (April):  Days are getting even longer and temperatures are warming up so you might not get the lightest, driest powder, but what you do tend to have is more settled weather (which means more heli ski fly time) and a more stable snowpack, which allows you to ski more of the steeps – which is of course what makes Alaska such a special spot for heli skiing.

Heli Skiing in Alaska Price Watch:  the prices are consistent throughout the season, except for the first two weeks of the season which are about 8% less expensive.

Skiing All Year Round

We often get asked – is it possible to go skiing all year round? And our answer is ABSOLUTELY! We’ve even compiled a list of where you can so you can get your powder fix in every month of the calendar year. December – April Canada For the most consistent and reliable heli skiing in […]

What to expect when heli skiing in Sweden

and why it should be your next heli skiing trip… Sweden not only offers a fantastic closer-to-home option for a heli skiing adventure for travellers coming from the UK but it is also home to one of the last, great wildernesses in Europe – and it’s all just waiting to be explored.    Although the season […]

5 Apps to keep you Ski Fit

We’re firm believers that keeping fit is really important for any skier; if you are in great physical shape then you’re going to enjoy your skiing no matter what challenges are thrown at you, plus staying fit is widely recognized as being great for mental health and general wellbeing. We’ve pulled together our favourite 5 […]