Steepness in skiing is relative.  A black diamond ski run in a resort is usually about 35 degrees.  But in the backcountry of CMH heliskiing, the snow conditions have more to do with the perception of steepness than anything else.  On a spring morning, before the sun has warmed firm snow into velvety corn snow, a 25-degree slope high on a big mountain can feel terrifyingly steep.  On the other hand, in ideal CMH powder, a 50-degree pitch tucked away in an old-growth forest can feel casual.

For a perspective on steep skiing, I tracked down Dave Gauley, the man behind the CMH Steep Week, the Assistant Manager of CMH’s heli skiing lodge, the Cariboos, and one of the only skiers I know who has studied the physics of steep skiing to a doctorate level of understanding.

TD: What’s the angle limit of a ski?

DG: When I was first getting into steep skiing I would measure everything with an inclinometer, and I experimented with what was possible – and not possible – on smaller things with less consequence. One of the best places I found was the Blowhole on the Blackcomb Glacier. The right edge goes from about 40 degrees to 60 plus.  I found once you get more than 62 degrees the odds of holding an edge are slim.

DG: The steepest I have skied is 62 degrees for about 1,000 feet. It required intense concentration, and very slow deliberate movement.  That is extreme skiing though, and my definition of extreme skiing is one where if you fall, you will die.

TD: How steep do you ski with the CMH Steep Week?

DG: We DO NOT take anyone into this sort of extreme terrain. We get on terrain as steep and challenging as any guest has ever wanted, but we are NOT extreme skiing.

TD: That sounds fun. So how good do you need to be to join a Steep Week?

DG: Steep week guests should be comfortable on steep ski resort terrain. The program starts slow and small, not getting on anything really big until the guides have a chance to assess the guest’s ability and confidence.

So we start out skiing something steep, but short where the consequences of a fall are mellow.  We also give instruction on how to handle various conditions we encounter – like adjusting your fall line to avoid getting tangled up in your own slough.  We ski some great lines, but always allow a margin for error.

TD: What about your more outrageous steep skiing experiences like Alaska’s Mt.Deborah.  Rock and Ice Magazine called it the “biggest, wildest, most committing ski descent in North America.”  What was that like?

DG: The west face is 3,200 vertical feet and 60 degrees through the cliff band, then 55. The cliff band is that chocolate chip section in the lower part of the picture. For this descent the crux was getting through that cliffband, and climbing it first allowed us to find the route. There is still about a third of the face not visible in this photo. 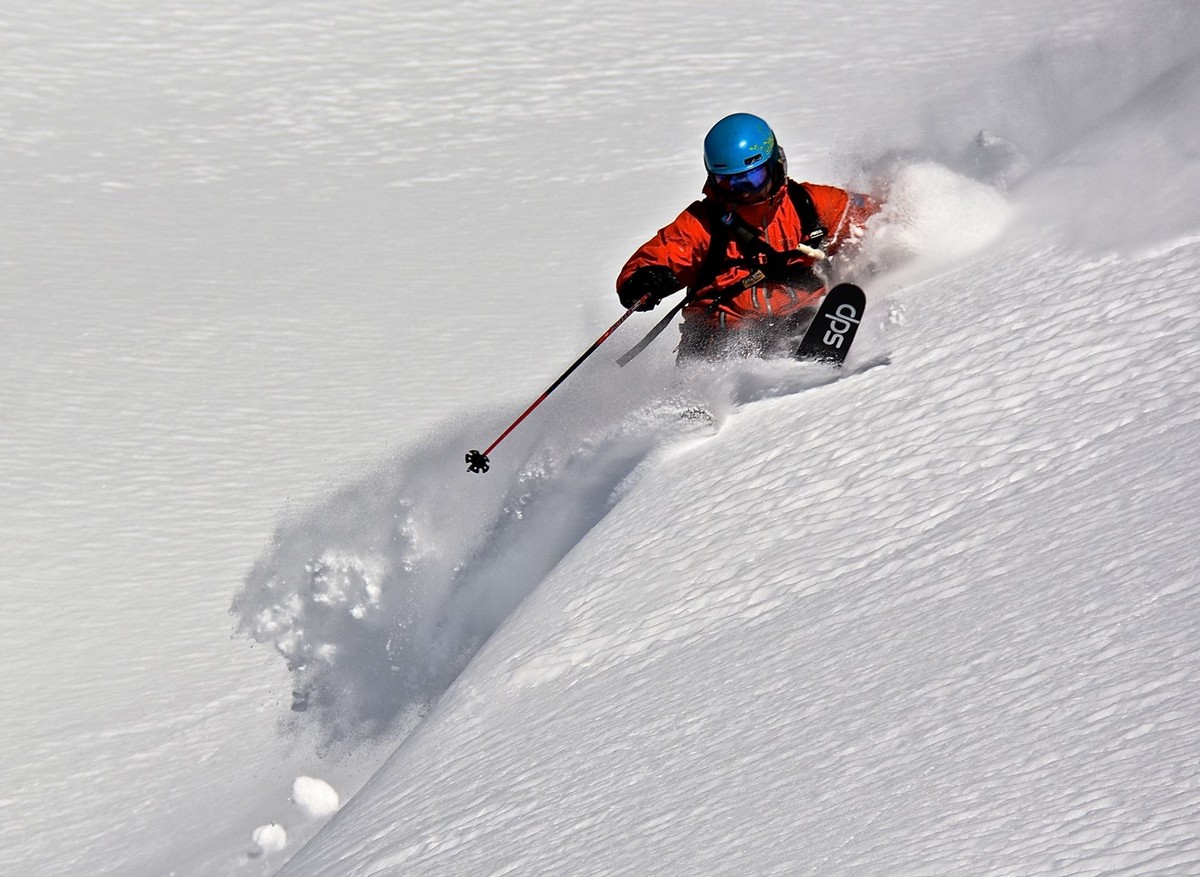 TD: How do you hold an edge on something like that?

DG: I kind of sit on my uphill foot, and feather the edges of both skis, so if I start to lose the uphill edge, I can feather the downhill edge a little more.  My partner, John Chilton, did more jump turns, which I am not as comfortable with as I like to maintain contact with the snow.

TD: How were conditions?

DG: Conditions were good firm snow ribbons a few metres wide bordered by blue ice. So climbing the line first is crucial so we knew where the snow was.  If we hit ice – we would not be able to hold an edge – bye, bye.

TD: How do you even get into your skis?

DG: First I clipped my skis into my ice tools. Then I excavated a platform with my other tool. Then came the scary part of switching crampons for skis. I could not step into my bindings, as there was nothing to push against, so I pulled them up onto my feet with my hands. Once the skis were on, and everything was in the pack, it was a good feeling.

TD: What was it like making those first turns?

DG: We dropped in at about 10:30 at night, in beautiful Alaskan alpenglow of orange and purple and blue.  The slough from our skis sounded like Niagara Falls falling for that far.

Want to push your own limits? CMH are running two Steep Camps in the Cariboos in 2012: April 07-14 and April 14-21. Please contact us for more details on heli skiing in general. In the meantime, check out more photos of Steep Camp in 2011 here